These awards are ordered into Ag (10 winners), Au (7 winners) and Pt (3 winners). Within these categories they are in no particular order.

So without further ado, onto the awards.

Monday, monday, monday. It’s generally a slow day of the week for chemistry and to be brutally honest it was a slowish start to #RealTimeChem week. Not in terms of numbers, I’m always impressed by the number of people who join in, but in some respects it’s to be expected that the best chemistry isn’t going to happen on a Monday, when everyone is just getting into gear.

Renée is a long time RealTimeChem supporter and this is the first of many cups of coffee drunk during RealTimeChem week and I love the mug!

Luke may not have had a good start to #RealTimeChem week, with the first piece of smashed glassware of the day, but it’s a pretty spectacular break.

Not a great start to #RealTimeChem week... Smashed a sep funnel. Good thing it was only step 1 of my reaction! http://t.co/ncQqm7qaXf

A somewhat artistic look at marking from the camera lens of Laura Jane. I hope the rest of that student’s questions got just as many ticks!

Mags Lum – I am jealous of your personal set of glassware – having left the lab I now I have none. 😥

I hate it when people swipe my glassware so @DeepPurpleFeet got me personalised Erlenmeyer flasks. #RealTimeChem http://t.co/2OKobUANoO

Dr. X must know I’m a sucker for a good old “mysterious” tweet, that makes chemistry sound fantastical and magical.

Kicking off #realtimechem week with quantum dots and a molecular mystery. Tales of intrigue and glowing vials.

Kat Badiola is one of the best RealTimeChemmers around, you should follow her blog, which is one of the best examples of open science around. We’ve all had something stinky/toxic/horrid in our fume hood that we just leave for later, and left for our “future self”.

You can always trust Vittorio to come up with something humourous. Dewars seemed to be a thing this Monday.

Thanks for labelling the nitrogen dewar in such understandable way. #RealTimeChem http://t.co/oTVfbqEIMR

Sarah sums up the drama of Undergraduate labs quite succinctly. Anyone remember a UG lab session where something didn’t break/catch fire/explode? …Oh just me then?

Tom promises he’s still a chemist. I’m inclined to agree. Only a chemist puts a setup like that together.

Three Fortnights gives us three fortnights worth of wisdom. I’ve chosen this because at least 10% of my lab time was searching for the right adaptor….

Don't have the right adapter: use four sequential adapters instead. #RealTimeChem 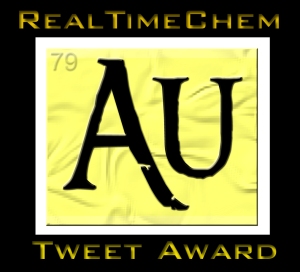 Michelle from the Dickinson Nanomechanical Research Lab, shows that not all chemistry is conducted in a fume hood.

Penny Higgins is a geochemist by trade and she made many tweets on Monday (as she does almost everyday!), showing you her process is great up close detail. This is just one example:

You'll just have to believe me when I say there's 200 micrograms of carbonate in there... #realtimechem http://t.co/gHc7xuXHTV

Matthew provides one of the few vines of the day. Not as spectacular as he would like, but it’s showing chemistry as it is, and that’s what #RealTimeChem is all about (click for the video).

Vine of me setting up rxn with DAST. Not nearly as exciting as I had hoped since bottle is old #realtimechem vine.co/v/bPZgm9ALear

Orange + blue = green? Martin Schroder’s research group at Nottingham show off their new MOFs and get some unexpected colours.

Dr. Neil does exactly what we all do in the laboratory. Make do and mend! You’d think it was World War II…

Fixing the vac controller on the Buchi so it actually stops at the pressure I want! #RealTimeChem http://t.co/XG6hxA93Nu

David Nutt is chosen as a representative of the many lecturers who joined in on the day, who can probably emphasise….

It’s always good to see a young aspiring chemist show such enthusiasm for the subject. If RealTimeChem can inspire even a single young person to choose chemistry, it’ll have been worth while. ΔD tweeted some nice stuff from his high school labs, and deserves this award wholeheartedly.

Being as involved in #realtimechem as possible even though I'm only a high school student aspiring to be a chemist! http://t.co/EPO57v1HBY 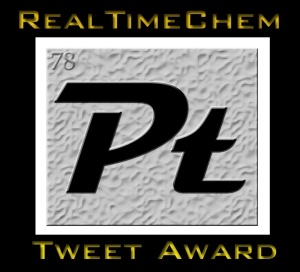 The Grumpy Chemist wins top prize for the day for the prettiest crystals of the day! We all love a good crystal.

Followed by lab through a flask of happy crystals. #realtimechem #chemtime http://t.co/qwNKU38UJm

Come on that enthusiasm for new safety gloves is infectious isn’t it? Albano tweeted various #RealTimeChem throughout the day, but this one is just good fun.

A fun game from Chemist Hulk for #RealTimeChem week, who has guessed the glassware in the Hulk’s #RealTimeSmash? 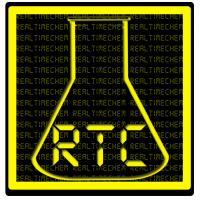